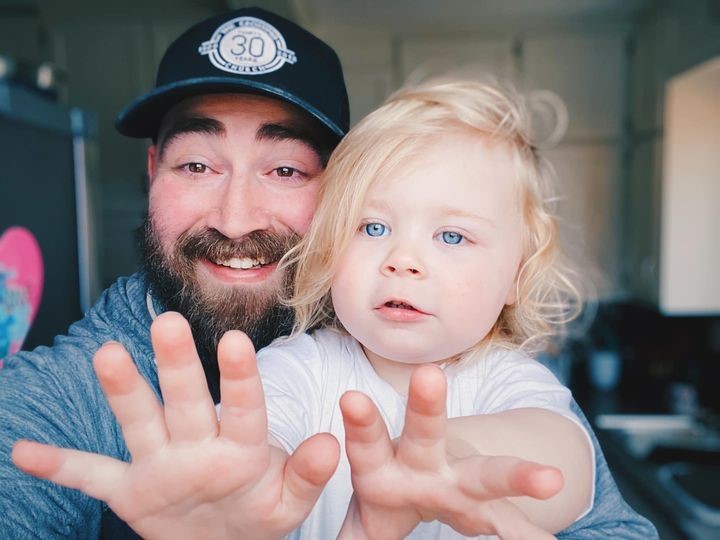 It’s sad but I’d assume that today the words “modern”, “family”, and “man” the way they are used in the title of this passage might cause a sense of angst or fear or frustration.

Well currently there is a lot of divide around the idea of what a family is and what a man is. Then, add the word ‘modern’ at the front and it might just sound judgemental. Lol

I admit, on the outside surface, the modern family man can take various forms that suits whatever family dynamic or situation he may be in. Whether stay-at-home-dad, sales professional who enjoys striking deals regularly on the golf course, single father juggling work and child rearing, or the typical 9-5 worker who comes home from work either exhausted or engaged.

Like most but not all, I was raised in a pretty traditional nuclear family style home on the prairies of midwest Kansas where that was definitely the norm and expected. A mom, a dad, and a brother. Dad worked and mom stayed home.

As I’ve moved to California I've learned that the Modern Family Man can take even more forms than what I've mentioned. California is increasingly more diverse and individualistic than most other places in the country.

My perspective, understanding, and acceptance of the modern family man has broadened significantly.

Although the outward expression of the family man often looks vastly different, it is apparent that our modern culture and American society is taking many different forms as well. As for the purpose of this article, the forms that society is shaping into are becoming increasingly harmful and damaging to the modern family man and humanity as a whole.

To elaborate, here are some of the dynamics and shifts happening in society.

First and foremost, the Covid19 Pandemic has created an “eye opening” experience with many people re-evaluating their own lives. 79% of people say the pandemic has opened their eyes to cracks in society. Some of those cracks are the political system, racial injustice, and police restructuring.

Another interesting fact is that Americans are choosing to get married later in life, usually signifying the fear of a lack of security before entering into that type of long term commitment.

The pace at which life happens has gotten to near warp-speeds! The age of digital information as we have it now it is taking an unprecedented hold on our attention and need for instant gratification. GenHQ.com says that GenZ’ers probably don’t even remember a time without social media. News is relayed mere moments after the event has actually happened.

These are just a few but there are plenty more happening. But what do these shifts and statistics tell us about the Modern Family Man?

It’s difficult to put an exact pin on it, but the societal shifts have some explaining to do.

In my honest opinion, it’s because as family men we’ve become weak, selfish, looking out for only ourselves. We have minimal self-discipline and like a kite in the wind we satisfy our fleshly desires. We find identity in success and material possessions. We’re numb to the core and can’t even think for ourselves. Uneducated, poorly read, and lack the ability to articulate our emotions.

Sounds like we’re just a bunch of pansies. Why?

In my understanding, through personal conversations, experience, and research - the modern family man has been scarred. Cut deep. Jaded. And most don’t even know it. We’ve taken a real beating from the world, our jobs, our friends, our families, our history.

There’s a deep pain in the modern family man that’s been put there somehow. The way it tends to soothe itself is with all the things the world tends to offer for medication.

I know that some of my sentiments around the issues and shifts happening may sound harsh but we are in a time when I believe we just need to cut to the chase. We’ve gotta get past all that. Besides, we know that all already right?

And I’m one of them, too. I’m not just speaking about others. I’ve had my fair share of challenges, laziness, selfishness, greed, etc...

But the fact of the matter is we’ve lost touch with the identity of who we really are. We’ve allowed the world to define us. We’ve given in to the pressures that society puts on us - to the bullying, the name calling, the peer pressure, the belittling sarcasm.

That constant pressure down on us has finally caused us to crumble, and we’ve succumbed and become what the world tells us we are.

Men have been hurt, wounded - I acknowledge that.

But it’s time to remember who we really are. Remember that no one else can dictate our future, truly devalue us, break our trust, or cause us shame.

Who are we really?

We are Men. More than that, we are men and boys that belong to our creator. Created in the image of the God of the universe.

We are sons of God, the King of kings. Predestined for greatness.

We are visionaries, called to build a better future. We have been bought, paid for, died for, to save us from ourselves and the world and remind us of this life-changing truth.

It’s time to wake up to who we are and who we were meant to be. Be emboldened, my fellow family men. Remember the Truth that no weapon formed against us shall prosper, that nothing can separate us from the Love of God that is in Jesus.  No fear, no doubt, no shame, no opinion, no argument, no bad decision.

To all modern family men out there, we must turn away from the world. We have to stop looking for validation and approval in all the glorious ways that the world may have to offer it. We must turn away from what our momentary and fleeting desires say we want and turn towards Christ. We must rid ourselves of the easy going, pleasure-filled life and envelope ourselves with people who challenge us, study and read long books, do hard workouts, wake up early, follow through with your word, stick out our relational commitments.

God is for us so what could be against us?

That...Is the truth. Everything else is a lie.

Once we realize all of this, I beckon us to unite and charge forward towards things that go against the grain of this world but with the grain of who we were meant to be.

We were meant to be great warriors, the leaders and priests of our homes and communities. Fighting for the greater good.

There’s qualities in every family man that gives them their unique strength that no one else has. But there’s a few things that we all need to possess and strive for to be the Modern Family Men we were meant to be. It’s these things that I believe will bring an almighty force of good against the darkness that is taking territory and harming the Modern Family Man.

Qualities like Passionate Sacrifice, Unconditional Love, Tender Strength, and Focused Self-Discipline.  We must practice Extravagant Generosity, seek to be Intellectually Sound and Articulate, strive for a Healthy Work-Life Balance, and live a Purpose Driven Life. We have to diligently seek Prayerful Solitude but lead with Decisive Leadership. We have to Accept Responsibility and be Lifelong Learners.

It’s these types of things that we were created to emulate and pursue diligently and passionately. These are the true marks and tell tale signs of a real Modern Family Man.

Now, I understand that some of our fellow brothers have what I would call special giftings that make it more challenging to express some of these qualities. But, that is why the rest of us must help carry them to the finish line with us.

Now, join us, and let’s rewrite how the world described and defined yesterday’s family man and let’s become Modern Family Men. Let’s take back our ground and elevate the standard for all men.

Leading my family in a way that inspires and offers growth, authenticity, unity, and intentionality has bee...

Conversation with Aaron Guyett: How to be intentional, homeschooling advice, and building a family legacy

We got to dialogue with Aaron Guyett, of Leaders of Leaders. Aaron is a US Marine, entrepreneur, coach, and...

Navigating Fatherhood and the Importance of Family in a Broken World

See which tags match your interests. Create an account today